The Global Goddess is an Australian editor and journalist who has spent 30 years working on newspapers and magazines in Australia, Hong Kong, London and Singapore.  Christine’s long line of awards makes her one of Australia’s most creative and influential journalists.

From reef, ranch and rainforest plus a bush getaway as well, when it comes to romantic retreats on the Capricorn Coast, we have four you’ll adore. The heat has departed for the day, but not the romance.

High on a steep Yeppoon hill overlooking Farnborough Beach to the left, Main Beach to your right, and straight out to Keppel Bay and Great Keppel Island beyond, sits Oshen Apartments. Pull up a balcony perch in an oceanfront apartment and watch the ebb and flow of the tide over the rocks. Inside, it’s sleek and sophisticated, there’s Bosch appliances, edgy artwork on the walls, and a vidal sasson hairdryer in the bathroom which stocks Australian-made toiletries. Downstairs, the pretty pool overlooks the ocean.

6 romantic things to do in the Capricorn region>>>

If your idea of romance is a retro holiday redolent of your childhood, Yeppoon hits the spot, with balmy boutiques and gorgeous galleries oozing coastal charm. For local flair, pop into Coastal Funk, which boasts homemade fragrances such as the Yeppoon Sunrise and Keppel Moon. A few doors up, check out the local artwork of Jet James.

Back at Oshen, when the sun sets in the west, it reflects off Keppel Bay in a fairy floss pink, a young couple cuddles under a blood red moon below, and in the morning, a scarlet sunrise in the east will kiss you awake. Oshen has an array of apartments from studio rooms to a premium penthouse apartment. They came to Rockhampton on their honeymoon in 1977…and never left. John “Marto” Martin, a former industrial chemist, and his nurse wife Genevieve, came from wheat and wool properties down south, and were adamant they wanted a block of land with permanent water. A chance encounter with a policeman for speeding saw Marto tell the cop he was looking to buy some land and not only was his speeding fine waived, but the police officer recommended a real estate agent who knew of a place at Byfield.

Pioneer Cabin was the first cabin to be built in 1981, and by 1990, the Martins were ready to open Ferns Hideaway Resort and its five cabins built from yellow stringybark and bloodwood on the property.

On a Saturday night with Marto, who played in bands all around Queensland in the 70s and 80s, performing on guitar and vocals.

Sleep in one of these charming cabins, replete with fireplaces, swim or canoe the cool creek, or camp among the bloodwoods here.

Back in the cabin, late at night, the fireplace crackles and cackles, just like this couple who are as much in love as they were back in 1977, and who burn just as bright. 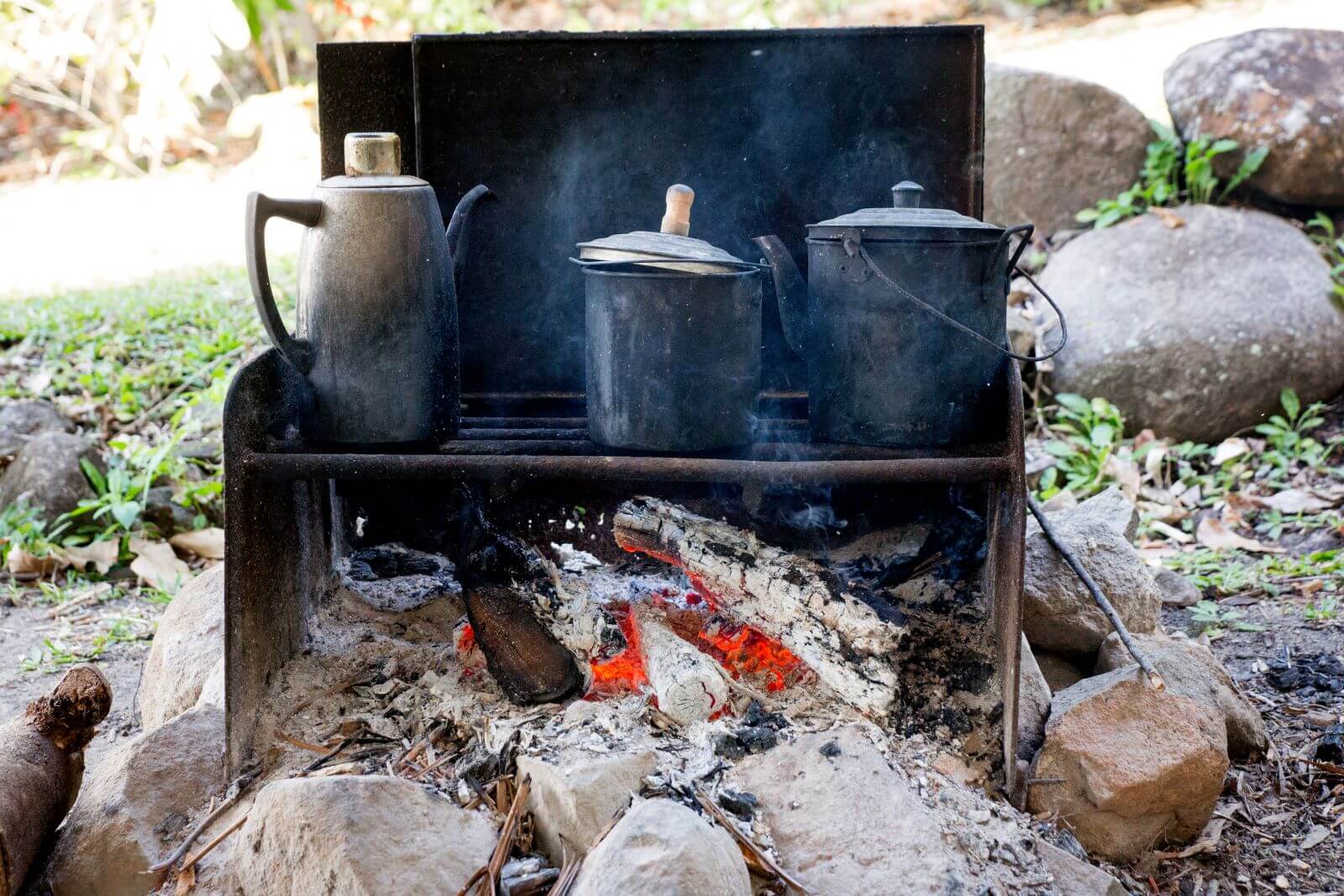 Ready to pop the question? See these romantic locations>>>

The wild wampoo doves are serenading the silence at Byfield Campstay whose lush rainforest canopy marks an opulent arrival in the Australian bush. Want rustic romance? How about 24ha of undulating land where a maximum of only 80 people are allowed to camp. There’s two eco loos and two bucket showers with plenty of hot water on this stunning site which is also home to 54 different birds, wallabies, emu, echidnas, a wild horse and even dingoes.

Owner Beth Bishopric says there are 20 official sites which cater for a maximum of four campers each.

“It’s very basic, and we’ve tried to keep it like that,” she says.

“They all come for the seclusion of it. They love the peace and wildlife.”

Payment of your camp fees is via an old-fashioned honesty box: it will cost you $20 for a site, or $15 if you’re a single, and when you leave, you’ll pass Jealous Road. (Ironic!)