When not storytelling about the region, Heather can be found snorkelling the magical Southern Great Barrier Reef or getting the best views in town on a bike ride to one of her favourite beaches. With a background in marketing she’s passionate about sharing her adventures with the wider community. Take your beloved four-legged furry friend on your family vacay!  The Capricorn Coast boasts many off the leash areas for your dog to enjoy.

Off-leash areas – All beaches before 8 am and after 4 pm daily unless otherwise signposted. At all other times, your dog must be on a leash. Farnborough Beach, Yeppoon from Bangalee boat ramp south to Barwells Creek with access via Hinz Avenue excluding weekends and public holidays. Fisherman’s Beach, Emu Park from the beach access 150 metres north of Bell Park to Tanby Point with access via Hill Street excluding weekends and public holidays. There’s nothing is more exhilarating than driving on the beach!

Seventeen kilometers of beach beside the awaits you. The 4WD access to the beach is at Bangalee, onto Farnborough Beach. Dogs are allowed off leash from Bangalee boat ramp onwards to Barwell Creek.

Before you go, just check the tide times, they’re handy to know when driving on the beach, no one want to get stuck in the sand.

Following the coast road south is the gorgeous Lammermoor Beach which stretches 2.5 kilometres and is one the most popular beaches on the coastline.

With the dog in tow and ball to throw, enjoy this stretch of coastline,  you’ll meet the locals taking their pooch for a walk also.

Opposite the beach is Sea Breeze servo, grab some fish and chips, or a burger and enjoy at one of the picnic areas at the park along the coastline or at the beach. Head to Rosslyn Bay Marina where on the right-hand side you can find Kemp Beach, there are also several car parks on the Scenic Highway that links Yeppoon and Emu Park.

Take the easy climb through up the stairs to fan rock, where an ancient volcano formed the rock formation, this is a great spot to capture the sunrise while looking out to the beautiful Keppel Islands.  Look out for the migrating Humpback Whales from July to September.

Take the path a bit further up and you’ll be looking over Keppel Bay Marina and Yeppoon.

Although dogs are not allowed in the picnic areas or walking trails of the National Park, they do have plenty of space to run and play on the beach and in the sea. Grab a coffee or a bite to eat at The Waterline Restaurant, Keppel Bay Marina, where dogs are welcome.

Following the road south and you’ll come across Mulambin Beach. If you’re heading from Emu Park way it is north of Causeway Lake. The northern end of the beach is cradled against Bluff Point, and in the south, Pinnacle Point, both of which are part of the Capricorn Coast National Park.

Keep an eye out for kite surfers hitting the waves or blokarts scooting along the beach. 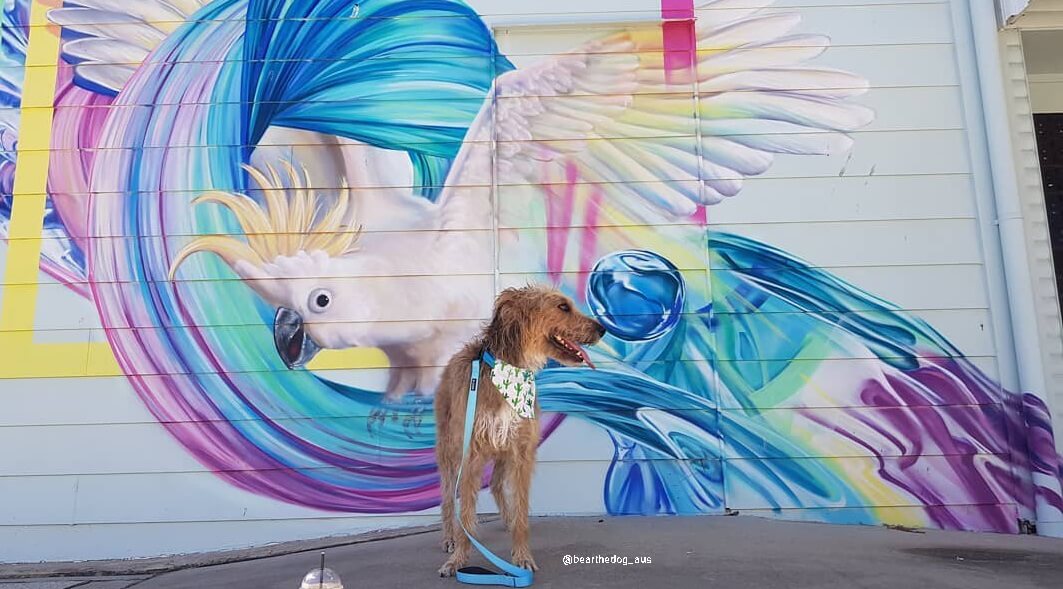 Causeway Lake is a man-made feature, formed by the bridge that crosses Mulambin Creek, which allows fresh salt water in on the high tide.

Flathead or whiting for dinner? the bridge is a popular fishing spot with the locals particularly as the tides turn.

Enjoy the day out with the family having a picnic or some fish and chips, with a playground for the kids, fishing, kayaking, SUP or some swimming.

Dogs are permitted; however, they must be kept on a leash.

Whether you’re taking in some of the sights at Emu Park, from the winds whistling in the signing ship to taking a moment to stroll and reflect at the Centenary of ANZAC Memorial Walk, Emu Park is a must when driving along the Capricorn Coast. Dogs can run freely on Fisherman’s Beach with access 150 meters north of Bell Park to Tanby Point with access via Hill Street, excluding weekends and public holidays.

Check out the artwork at the Main Beach Bathing Pavilion.

View other street art you must visit>>>

Handy things to know prior to holidaying with your pooch: Your dog is your responsibility, it’s your job to monitor their behaviour and make sure your dog is under control while in these areas. It is important to be a responsible pet owner, including leaving our parks and beaches clean. Best to check on each Council’s website for more details, we’d hate for you to get an unwelcome fine on your holiday.

« Previous - Dog friendly places to stay in the Capricorn region. Next - 5 Reasons you need to take your kids whale watching in Keppel Bay »